I had to grow up, and fast.  I’m no longer just a parent, I have to be so much more.

I’m her voice, and her advocate.

– Continued from ‘the beginning’ you can find it HERE

For genetic tests they had to take blood from a vein, they wouldn’t let me be there for that, they said I needed to get out of the hospital, as I hadn’t left in days. They made me go for a walk around the block, it was the first time I had been away from her.

It’s strange, Every memory from that time is so clear, but I can’t remember a second of that walk.
As I was walking back into the Peadiatrics department I could hear her distinctive cry, she was screaming. There was no mistaking her sound for another baby, I ran the rest of the way down the hall and they had just finished. I promised never to leave her side again for any procedure, I would be right there to comfort her because I couldn’t stand the fact she went through that alone.
There was a big bruise on one arm, and in the other they had put a drip in in case they needed more blood and a little splint on her arm to hold it straight.
I sat awake and held her all night.

48 very long hours later the diagnoses came back positive for cri du chat. She wasn’t even a month old.
For 2 days I didn’t see or speak to anyone, I didn’t log onto Facebook to see all the comments congratulating me.

Every comment saying to ‘enjoy motherhood’ made me sick. How could I enjoy anything? I don’t feel like a mother, I don’t feel like anything.
Explaining the syndrome over and over and over as no one had ever heard of it. People asking if it was something she’d ‘grow out of’. I didn’t want visitors. For some reason I felt like a failure, I was embarrassed. It’s my fault. Of all the things to fail at, I failed at growing a baby. Again I thought, it isn’t supposed to be like this!

They gave me referrals for more ultrasounds on her liver, kidneys, brain, as well as booked her in to see a cardiologist. Everything came back fine. I was so thankful! She had cri du chat, but she was healthy. It was her first (of many) victory among all the bad news.
She was beginning to gain weight with the tube feeding so I would be able to take her home once I was confident enough. With the exception of that walk, I hadn’t left the hospital.
3 days after that I went home to begin my new life.

For the next 2 and a half months I struggled, breast feeding, then tube feeding, then expressing for the next feed, every 3 hours, trying to keep up with cleaning, washing and general housework. I was exhausted.
She also used to pull her tube out almost weekly, it was a half hour drive to the hospital emergency room to put it back in.
Her cheeks were always red and puffy from pulling the tape off so often. I stopped seeing the maternal child health nurse as they had no idea about CDC so every question I had She would palm me off to the pediatrician, and the pediatrician took ages to see. I also found the strength to leave an unhealthy relationship to live in a garage.
I felt so alone.
Ella and I were alone.

I can’t do this

During this time I was also sent to see a geneticist, the closest one was 2 hours away. I thought I would finally get some answers!
It was the most disheartening experience so far. After a 2 hour drive with a 2 month old baby, the appointment lasted about 15 minutes and consisted of her asking if I’d googled cri du chat, and telling me the long list of ‘cants’ that I’d heard before. I drove home with tears running down my face.
I can’t do this
I can’t handle this
Why is this happening
For some reason the thing that still sticks out in my mind, was him saying Ella will never have a bank account. Like that’s the most important thing in the scheme of things?
I wondered if he goes to other parents, oh, she’ll never walk or talk, but boy will she rock that supersavings account at the NAB, No worries!
I chuckled through the tears and thought, this is it, I’ve lost the fucking plot.

This was probably the hardest time in my life. I felt like no one would ever be able to answer the million questions I had about Ella and her future.
I felt insane repeating myself to everyone that asked ‘what’s wrong with her?’ then having to explain what cri du chat meant when I still barely understood it myself.
Strangers in the street looking in the pram exclaiming ‘Oh I thought you had a cat in there!!’
I guess it was an introduction to the lifetime of stupid bloody questions I’d been thrown into.

My milk dried up, As soon as she started on formula constipation became a massive issue. Nothing helped, so she needed a suppository every second day. Even now she continues to have problems with her bowels, a daily laxative barely working.
Finally when Ella was 3 months old the Pediatrician said if she put on 100 grams at her next weekly weigh in the nasal gastric tube could come out and she did! It was the happiest I’d been since she was diagnosed. 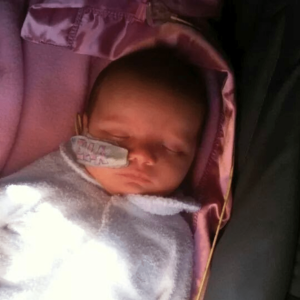 I wanted to get Ella into early intervention. It took months of calling different doctors and therapy places, getting referrals and letters from different gps and pediatrician’s and specialists. I even saw one pediatrician who spent the whole appointment asking me questions about CDC, he’d never heard of it. I felt like I was getting nowhere. This is when it kind of dawned on me, I wasn’t just a mother. I had to be so much more. No one was going to hold my hand through this, I am an advocate, a carer, a therapist. I had to become a fighter. I had to find the confidence to disagree and argue with people that I previously would have seen as superiors, people with degrees and education when I barely finished high-school. And I had to grow the fuck up, and fast. I found my own place and with help from my dad to pay the bond Ella and I moved again. It was here that things finally started pulling together.

By this stage Ella was almost 6 months old and already behind. She wasn’t sitting up, or crawling or rolling, but I finally found someone to help!

Ella started physiotherapy, occupational therapy and speech pathology, also got her into a playgroup for kids with delays. It was also around this time I met Joel, my partner. He has been amazing, he stepped up to become a good father figure to Ella and an amazing support for me. Things were looking up!

Now almost 7 years later things couldn’t be more different. I’m happy. Ella has a new baby brother that she adores, she started school last year and she is smashing her goals.

It is still extremely tough at times. When she has meltdowns or self harms, when I can’t figure out what’s wrong. When she doesn’t understand. When she plonks her butt down in the dirt (or worse on the road) on the way somewhere and refuses to move for seemingly no reason.

But Her list of ‘cants’ is slowly getting shorter. She started walking at around 2, but really took off by the time she was 3. She’s still really clumsy but she doesn’t seem to care. She’s always got bumps and bruises that she shows off quite happily. She doesn’t talk but we’re working on communicating. She knows quite a few sign words and can use her communication device for basic wants.

Ella surprises me so often with what she comes out with. She can recognize a few letters and her name, and she can count to 6! (most of the time)
She’s got such personality and makes me laugh every day.

Never would I have chosen this life of mine, but I can definitely say, the good times now outweigh the bad.

2 thoughts on “Growing up”

This site uses Akismet to reduce spam. Learn how your comment data is processed.