This week’s post isn’t going to be puppies and roses. I promised the brutal truth so strap in, here it is.

I have had a super busy few weeks, with Ella getting sick, and sharing is caring so Reece and I got sick too, meaning days off school, no sleep and everyone is shitty.  Plus she’s had drs visits, 2 appointments for referrals, speech pathology, hearing test and then pediatricians and an eye exam next week! Not to mention the anniversary of my dad’s death was this week ‘m feeling run down, fed up and over it. So this week’s post isn’t going to be puppies and roses. I promised the brutal truth so strap in, here it is.

I feel so fucking isolated.

I never realised how out of touch I would become when Ella was diagnosed.  It’s not like I was suddenly an outcast, it started out so slowly I don’t even know when it happened. When she was young and I would catch up with other mothers that had babies the same age it wasn’t so different.  We’d all be so hands on, first time mothers feeding and fussing over our babies, some breast, some bottle, Ella with her nasal gastric tube.  We’d all be talking about similar things – about gas problems, lack of sleep, bitching about partners or things the health nurse said. I was still one of them, with a few extra appointments but still part of the ‘club’.

As the babies got older, and the mothers group babies started rolling over, sitting up, sleeping, and Ella was still the same it started to get awkward.  No one knew quite what to say to me, and I could sense it. I gave up on the group but started meeting mothers one on one.  It was ok, at first, but I started to get annoyed at their inane complaints. I was still grappling with the diagnosis, looking back I probably had depression and everything they complained about just seemed so inconsequential. 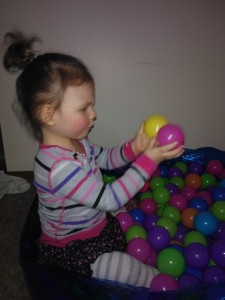 So frigging what your baby isn’t sitting up in the exact week the baby book says, Ella might never.
So frigging what your only getting one night a week ‘off’, I haven’t had a moment to myself in months.
So frigging what your bored ‘stuck’ at home all the time, I have endless appointments I could barely squeeze time in for this coffee!  I’ll admit it, I was bitter, and still trying to understand my place and my new life.
I bit my tongue, tried to keep up with the conversations, but when a friends baby was pulling up to stand, and she looked at Ella, who was still basically a potato, and said

“my kid is growing up too quickly, you’re so lucky you get Ella to stay a baby”

I couldn’t believe my ears. 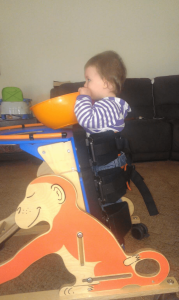 I realized then that I was different.  By this stage Ella’s peers are up and walking and Ella was still working on putting weight on her legs and honestly, I gave up. I Just kept Ella and I in our little bubble of appointments and Therapies.  It wasn’t until she started walking that I tried again, I’d take her to the park, I took her to a birthday party once, I’d take her out shopping but always we were the odd ones out.  At the birthday party I had the choice to hover with Ella, helping her play with her peers, making sure she wasn’t hurting herself or anyone else, making sure she wasn’t putting anything in her mouth she could potentially choke on, while the other mums hung out and chatted – Or making Ella stay with me and the grown ups so I could chat, which really isn’t fair on her.  In any event she got over excited and vomited everywhere and we left early anyway.

I’ll never forget all the unsolicited advice I receive. At the shopping mall one day, Ella strapped in her pram I was sitting feeding her some puree, because she still couldn’t handle solids. Another mother came and sat with her child.  She was there for barely a second and said
“you know she should be feeding herself real food by now”  With a look on her face like she’d just licked an armpit. I just shrugged, finished the feed, and left the mall.
Or at the supermarket, upon hearing that Ella couldn’t talk yet, an old lady suggested I
“read out loud to her” like I’ve never read to my kid, and that’s why she can’t talk.
Or at a rest stop, changing Ella’s nappy when a woman informed me that Ella
“should really be toilet trained by now, and mothers like you are just a lazy”
In the car afterwards of course I thought of all these smart ass answers that, at that time, was still too embarrassed to say.
At the park it’s the same story, I needed to help Ella play, all the while getting strange looks from everyone as Ella squeels and falls over far too frequently, often walking into things and reverting back to crawling.  Fielding questions of ‘what’s wrong with her’ from the adults and ‘whys she acting like a baby’ from the kids, while most parents, looking embarrassed,

dragged their curios children away from Ella until more often than not we were segregated from everyone.  I wanted to scream, its ok! Let them ask, as long as they’re including her I don’t care!

Thankfully Ella had no idea of my pain as every trip somewhere ended with me heartbroken and worried for the future. The perfect day at the park, was when there was no one else there, and we could just be ourselves without fear of judgement.

As Ella has gotten older, and the gap between her and her peers has widened, it’s only become harder. I don’t really have any photos of Ella with ‘friends’ and it breaks my heart sometimes, She loves other kids, but in general but they don’t gravitate towards her, she’s too ‘babyish’ for kids her age, too big for kids on her level, and older kids just don’t have the patience.
On top of that I just can’t relate to parents of kids the same

age as Ella, The things they are going through or celebrating seem so alien to me, so far off, some even unattainable.  Your kid can read, and write? Amazing! Your kid can go to the toilet and brush their own teeth? Frigging fantastic! They Play PlayStation games? Holy shit!

my situation is their worst nightmare.

I kind of relate to parents with kids that are much much younger, parents with 1 or 2 year olds going through similar struggles and achievments that I am with Ella, celebrating first steps, first wees on the toilet, first words.  But I find those parents don’t want to relate to me or hear about Ella’s achievements, I get strange looks at some things I celebrate.  When Ella first jumped, with both feet leaving the ground, was amazing! We worked hard on that hard, for months. I get strange looks, like that’s not even a milestone, it’s just something that happens.
Honestly? I think I scare them.  Both parents with kids the same age, and the ones with young kids, and especially the ones expecting a baby.
To them, my situation is their worst nightmare.  A 7 year old, still in nappies, still throwing tantrums, still working on the same simple things?  They don’t want to even imagine it, they can’t wait til this stage is past. And I don’t blame them, really I don’t, if the situation was reversed I don’t think I’d want to hear about it either.

And then we have the special needs parents circles. All going through our own different achievements and struggles, all probably feeling alone. At best, these groups are supportive, but distant, as we all get distracted in our own very busy lives.
And at their worst? It’s a big ‘who has it worse’ competition. Don’t get me wrong, I have found some support there, (especially in the cri du chat support group) but I’ve seen comment threads in some groups that are just parents saying
‘well you think that’s bad, I have to deal with…’
Belittleing eachothers struggles because of perceived differences when really we’re all just begging for someone to listen.
And I completely understand that too – We’re stuck in this no man’s land with no one to boast to, and no one to commiserate with.

All of this accumulates to feeling very out of touch with other people.  I’ve always been reasonably socially awkward (surprising I know! I’m so eloquent 😂)  I act confident, hold my head high, but usually walk away kicking myself for something stupid I’ve done or said.  But now I’ve got this ‘thing’ thats different, that Other People don’t quite know how to talk about and I walk a line between not talking about it at all, or talking too much. I don’t want to burden anyone with all my doubts and worries. I don’t want anyone’s pity.

Even with my closest friends I don’t talk about my deepest darkest fears. People don’t want to hear the frustration, the complete and utter helplessness I sometimes feel. The fear about for when Ella is no longer a ‘special needs child’ but just a person with a disability. The stress of what I’m going to do when she ages out of the system, or when I’m too old to care for her.  The worry that she’ll be 18 and still having violent outbursts. I don’t want to admit to the times I’m bawling over one fail or another, the times I want to give up. I fail so much more often than I succeed.  I set goals in my optimistism that are unattainable for Ella, then I have to re think or give up on.
Sometimes I lose my temper.
I walk away.
I yell.
I grit my teeth.
I pour a wine.
Who wants to be around that person?   So I boast the accomplishments, I post the perfect pictures, and make funny jokes and paint that damn smile across my face once again.
And just hope the next day, I have more luck.

If you know of or have a friend that’s a special needs parent, or if this rings true for you, please share.  Surely I’m not alone in feeling this way.

7 thoughts on “Out of touch”

This site uses Akismet to reduce spam. Learn how your comment data is processed.